This week, Maria is so excited to welcome Marlo Thomas!

Marlo Thomas is an actress, a producer, an author, a philanthropist and a social activist. In fact, she’s in the OG group of feminist icons. Having starred in the sitcom “That Girl” in the 60s, she is the prototype to the “single girl in the city” sitcoms that have been in production ever since. She’s won four Emmy awards, a Golden Globe and Peabody for her work in television and a Grammy for her children’s album, “Free to be You and Me.” In 2014, she was awarded the Presidential Medal of Freedom.

She serves as National Outreach Director for St Jude Children’s Research Hospital and is this month’s cover girl for Town and Country magazine highlighting her work with St Jude.

Last year, her book written with her husband, Phil Donahue, “What Makes a Marriage Last,” became a New York Times Best seller. Their book pairs well with their podcast Double Date, where you get to listen in as they pull down the curtains to learn from 40 Couples their secrets to a happy life.

Check out Marlo and Phil’s podcast

Enroll in the next Agape Intensive

Have a question for Maria? Visit here 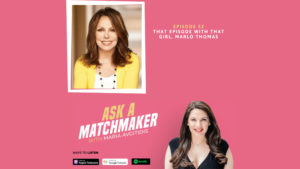 To learn more about how Maria and how her team can help you find love, visit agapematch.com

Join today. It’s the first step to meeting The One.